Into the eyes of the sun. That’s where the fun is. 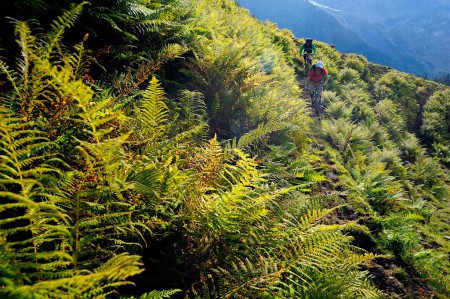 Lately I have been going through my mountain bike photos. Trying to find the ones I think are good enough to earn a spot in my fancy new gallery. What I got out of it, besides a headache, is the knowledge that I really really prefer the ones which are shot against the sun. And from a low angle. There is something special about that crazy light which makes for interesting color and contrast.

Anyway, the photo I’m showing you today was made in the vicinity of Engelberg, Switzerland. Me and my buddy Oskar Enander went up to Furenalp for some biking and shooting. (I was also modeling for some trail running shots he needed to do. Running back and forth along the same trail, raising my knees trying not to look like a buffoon 🙂 Good times.)

During the day we talked about different ideas we had for shots and images we wanted to make. Dreaming up stuff. I mentioned an idea I had about biking amongst a forest of ferns. I had spent a lot of time on the internet looking for such a location, but never quite found one. Oskar spoke about another photographer who has the idea of doing a shoot of a mountain biker or skier going down the side of an erupting volcano. Think big or go home, right?
Well, on our way home, down to the village, we decided on a trail I never rode before. And then suddenly. Ferns! Densely packed wonderful ferns. They covered the whole side of the hill. And there were trails in between them. Trails which screamed to be ridden. I was going bananas. Jumping off the bike. Screeming like a loony. I set up my camera, down low, against the sun, and fired away.

It might not be an erupting volcano. But it got ferns, and it carries the memory of a day well spent. Hope you like it too.